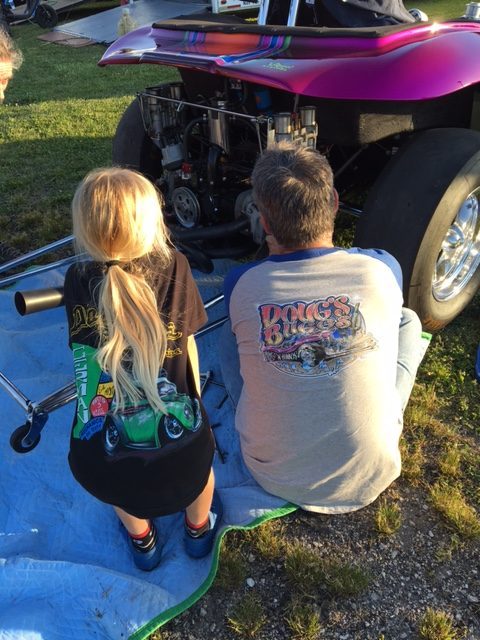 This past summer Doug’s Buggs and Bunnies (DBNB) had the opportunity to tow our supped up 1960’s style VW Buggy, drag car back to the mid-west and race. We were met by a very dedicated and welcoming group known as the Ozark Mountain Super Shifters  www.ozarkmountainsupershifters.com  at Central Illinois Dragway in Havana, IL www.centralilliniosdragway.com

The drive cross country was nothing short of interesting! Stopping along the way at the “cozy cone” (the Wigwam Motel, in Holbrook AZ) The motel pays homage to the Pixar movie ‘Cars’, the parking lot is lined with old cars, that are depicted in the cartoon as the main charters, a pretty neat stop, if you ask us!.  DBNB also took time to stop in Oklahoma City, making our way by the ‘clubhouse’ fire station – where “Framtruck and AZN, (from the National Geographic show “Street Outlaws”) call home base.  They had a ‘call out box’ right there on the patio, so we did what any self respecting racer would do – we called them out.  We’re still waiting to hear back!

Oklahoma city was a wonderful stop along the way a beautiful; clean city, great people with a peaceful atmosphere.  Before heading on the Illinois we toured the Oklahoma City National Memorial paying our respects to those who lost their lives in such a senseless tragedy, there was not a dry eye among us.

Roving on through the beautiful countryside, making our way to the track, we were pleasantly surprised by the track itself.  The people that make up the crew there at Havana Race Way – know their racing.  The track was immaculate,  racing well organized – giving all racers the opportunities to make several passes during test and tune.  The event, was all nostalgic drags, it was a sea of true American Muscle, so of course we fit right in with our VW Buggy.  Well we did stick out like a sore thumb however, our fellow racers and spectators alike welcomed our crew in, as if we’d been racing there for years.

DBNB cannot Thank Havana Race Way or the Ozark Mountain Super Shifters enough, you all made our experience well worth the haul.  Looking forward to racing again!